Full Name
Rumina Velshi, P.Eng.
Job Title
President and CEO
Company
Canadian Nuclear Safety Commission (CNSC)
Speaker Bio
Rumina Velshi is the President and CEO of the Canadian Nuclear Safety Commission (CNSC), Canada’s nuclear regulator. Rumina has been with the CNSC since 2011 – first as a Commission Member until her appointment as President in 2018. In February of 2020, she was appointed as Chairperson of the International Atomic Energy Agency’s Commission on Safety Standards for a four-year term. She has extensive technical, regulatory and adjudication expertise in the energy sector. She was one of the first female nuclear energy workers in Canada and has worked in various capacities at Ontario Hydro and Ontario Power Generation, the electrical utilities in the province. She also previously served as a Board member of the Ontario Energy Board, the economic regulator of the province’s electricity and natural gas sectors.

President Velshi actively promotes careers in science, technology, engineering and mathematics (STEM), especially for young women. She was a founding member of Women in Science and Engineering in Canada. Since joining the CNSC as President and CEO, she has launched a women-in-STEM initiative to consider ways to support women in STEM careers at the CNSC and elsewhere, and to promote STEM education by working with interested partners. She is a founding member of the Driving Advancement for Women in Nuclear (DAWN) - a group of senior leaders in the Canadian nuclear sector that support the goal of gender equality by undertaking key actions. She is also the co- lead of the International Gender Champions Impact Group on Gender Equality in Nuclear Regulatory Agencies.

President Velshi holds a Bachelor of Applied Science degree in civil engineering, a Master of Engineering degree in chemical engineering and a Master of Business Administration, all from the University of Toronto.
Speaking At
Panel Discussion: Generating Accountability in Diversity and Inclusion Work 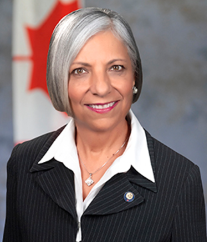